What We Ought To Be

What We Ought To Be 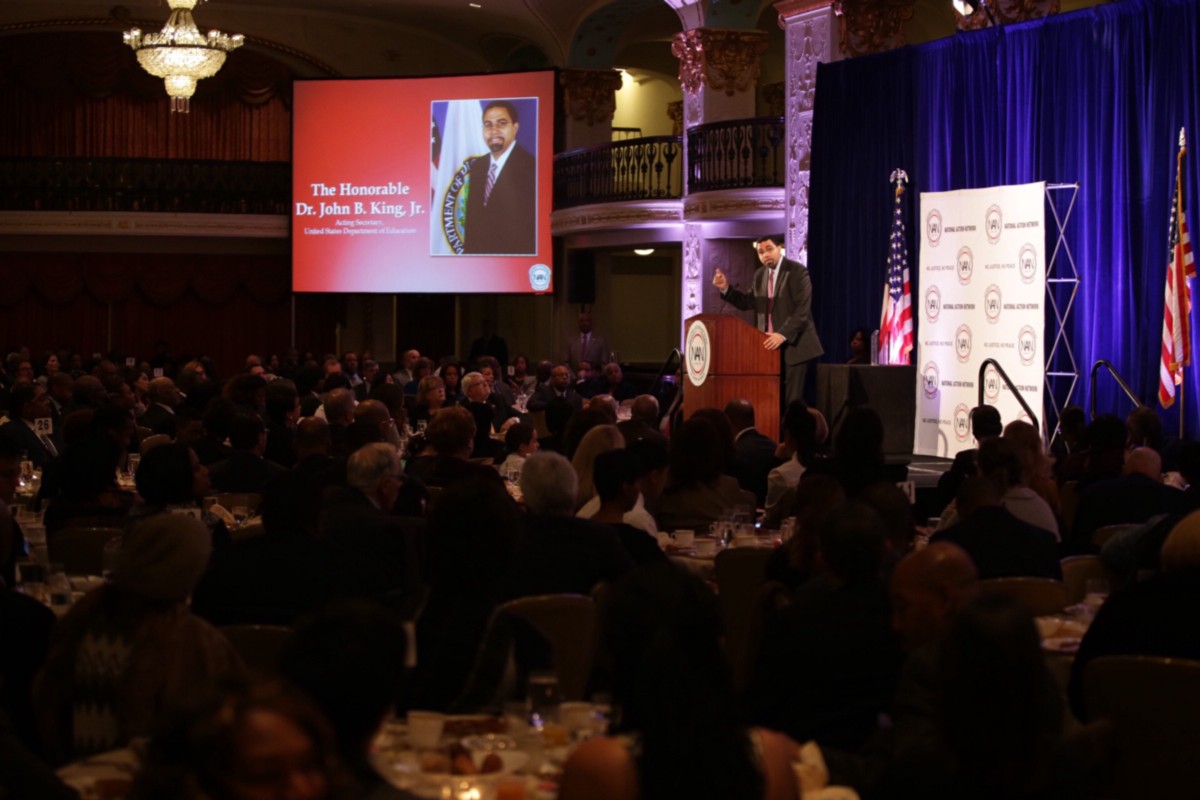 I don't know whether it's more daunting to follow you at the podium, or to precede the Attorney General. I do know that I'm glad to be part of this formidable gathering, and grateful to you, Reverend Sharpton, for your leadership.

On this day, we reflect upon the principles to which Dr. King dedicated his life:

And one more: Urgency.

Almost 50 years ago, in a sermon about New Year's resolutions, Dr. King described a conversation with his own children. He told them, "I don't ever want you to forget that there are millions of God's children who will not and cannot get a good education, and I don't want you feeling that you are better than they are. For you will never be what you ought to be until they are what they ought to be."

Are we what we ought to be?

But we are not yet what we ought to be.

How are we closer?

A few months ago, we announced the highest high school graduation rate in the nation's history—82 percent. That's possible because of historic reductions in the dropout rate, led by African-American, Latino, and low-income students.

The numbers of African-American and Latino college students are up by more than a million compared to 2008. And in 2014—the most recent year for which we have data—America had not just the largest class completing higher education in our history, but the most diverse.

These achievements matter, and we should thank and congratulate the teachers, principals, students and family members who did the incredibly hard work behind those numbers and who continue to strive for educational equity and excellence.

For every Emmett Till, there is still a Tamir Rice. Bias, prejudice, and the legacy of a long history of institutional racism continue to undermine the promise of equality under the law.

Likewise, persistent opportunity gaps undermine equality. As Julian Bond once said, "Violence is black children going to school for 12 years and receiving 6 years' worth of education."

And in his lifetime, an African-American man in the United States has been predicted to be more likely to end up with a prison sentence than a bachelor's degree.

We are not yet what we ought to be.

In a nation that imprisons a higher proportion of black males than did South Africa at the height of Apartheid, it is still no time for what Dr. King once called the "tranquilizing drug of gradualism."

The urgency I feel is deeply personal. I know that great schools and great teachers can be the difference between hope and despair, between life and death, because they were for me.

As some of you know, I grew up in Brooklyn—the son of two New York City public school educators. My father grew up in Bedford Stuyvesant, and became the highest-ranking African-American educator in the country, as deputy superintendent of New York City schools. My mother came to the Bronx from Puerto Rico as a little girl, the child of a single mother who was a garment worker. The first in her family to graduate from college, she became a New York public school teacher.

My parents' faith in education inspires me, though I never got the chance to know them well. When I was eight, my mother had a heart attack and passed away. Then, my father fell prey to dementia, suffering with what we now know was Alzheimer's. Life at home was scary and unpredictable.

When I was 12, the disease took his life, and I moved around between family members and schools. It would not have been hard to imagine a very different course for my life.

That I stand here before you today is a tribute to my New York City public school teachers. They made school a place that was at once challenging and nurturing, compelling and engaging. They saved my life. They are the reason I became a teacher and a principal, so I could try to do for other students what my teachers had done for me.

Our communities are filled today with young people like the boy I was, like the students I taught in Boston—young people with the odds stacked against them. And for millions of them, there's no lifesaving story.

That's why I feel such urgency about our work. That's why I firmly believe that educational equity and excellence must be national civil rights priorities.

Today, we stand at a crossroads. After 15 long years under the No Child Left Behind Act, which was too prescriptive and too reliant on one size fits all solutions, we have a new federal education law, called the Every Student Succeeds Act, or ESSA. It is a good law, and I commend Congress for passing it with strong bipartisan support in both houses.

But it would be wrong to see the passage of that law as the end of a road—in fact, it is the beginning of one. ESSA presents a moment of both opportunity and moral responsibility.

As you know, ESSA reauthorizes the original Elementary and Secondary Education Act signed by President Johnson in 1965. It was a civil rights law that must be viewed in the context of the Civil Rights Act of 1964 and the Voting Rights Act of 1965. Responsibility to ensure that implementation of the new version of the law lives up to its civil rights heritage rests with leaders in each of our states—and with all of us here.

The new law embodies much of what we've long believed in—particularly, and for the first time, enshrining high, state-chosen learning expectations, aligned to readiness for college and career, for all students as the law of the land.

There has been much discussion of the new law placing much of the responsibility for students' learning on states. And I want to say two things clearly. One is that there is a continued role in the new law for the federal government as a backstop to ensure educational quality for all children, a protector of our students' civil rights, and I and my colleagues at the Department take that responsibility very seriously. The second is that the new and larger role for states should be seen as a clarion call in the civil rights community.

The advocacy of the civil rights community will be essential in at least three significant areas: defining what learning progress means; ensuring equity; and promoting diversity in our schools.

Under ESSA, states will establish new accountability systems that will include additional indicators of success that reflect a broader picture of how schools are serving all children.

Starting today, we have a chance to transcend a mired conversation on how we hold ourselves as adults accountable for students' learning progress. Like educators nationwide, we've long been clear that that test scores do not tell us all we need to know and that strong math, reading, and writing skills are necessary but not sufficient for success later in life.

The ability to include new indicators of success means states can choose to also ensure that all students have equal opportunities to succeed in advanced coursework like AP classes. They can decide to look at students' socioemotional growth and whether schools are helping them develop skills like resilience and the ability to effectively collaborate with peers. They can ensure schools are intervening when students are chronically absent or struggling to become proficient in English.

The use of these kinds of new indicators of school success has tremendous potential to advance equity, but that will require the vigilance of parents, of educators, and of the civil rights community as each state creates their system of accountability.

Second, we must make quantum leaps forward in our approach to ensuring equity of opportunity for every student in this country.

That means redoubling the effort for some goals many of you have long fought for. Goals like high quality preschool for all students—perhaps the single greatest no-brainer civic investment a community or state can make. It means refusing to let politicians roll back higher standards and expectations for all students, now that we are finally making them a reality—because it's too often African-American students, Latino students, and poor students who adults don't expect enough of. It means ensuring that more schools serving the highest need students offer school-based healthcare, extended learning time, and other wrap around services.

And we must continue to work urgently to ensure, as the new law promises, that low-income students and students of color receive equitable access to effective teachers. Today, African-American and Latino children are overwhelmingly likely to have teachers who are less experienced or effective. We must ensure all students have diverse, well-prepared, well-supported teachers.

And we must continue the positive momentum that has developed around ending the school to prison pipeline. As many of you know, Black students are disproportionately referred to law enforcement and school-related arrests, as well as subjected to exclusionary discipline .

Under ESSA, states have new flexibility to implement thoughtful, evidence-based policies and interventions to enhance equity. The advocacy of parents, educators, and the civil rights community must ensure that they do.

And finally, more than six decades after Brown v. Board of Education, we must find ways to make our schools better reflections of the diverse society we have become.

We all know intuitively that the more separate we are, the weaker our democratic society becomes. Research shows that one of the best things we can do for all children—black or white, rich or poor—is give them a chance to attend strong, socioeconomically diverse schools.

We should support innovative, voluntary locally-driven efforts to promote socioeconomic diversity in schools. We should embrace opportunities where a middle school arts magnet program, or a dual language elementary school, or a regional science and technology high school can help to break down the concentration of our highest needs students in schools with access to fewer resources.

What all of this means is that your voices, not just here in Washington but in every state capital, are vital at a turning-point moment. As we look toward ESSA implementation, we must all mobilize for equity. I ask you not to wait and consider, but to act.

My father used to tell a story that captures the urgency of our work. He loved basketball and one weekend, while playing, he broke his wrist. When he went to work on Monday, with his wrist in a cast, the principal stopped him and told my father—who never took a single sick day in his 40-year career—that he could not teach that day. There was a regulation, apparently, about not teaching with a cast and the principal was unwilling to budge.

So what did my father do? He walked over to the counter and slammed his cast down, shattering it. Then he brushed the pieces into a trashcan, put his hand in his suit pocket, and went to teach his class.

He had no time to wait, to sit on the sidelines. He was determined to see that we would become the people we ought to be.

Let's become the people we ought to be. Let's act with urgency for the civil rights of our children.