Early in his Administration, President Obama made improving science, technology, engineering, and mathematics (STEM) education a priority. To meet the nation's evolving workforce needs, America will need to add 1 million more STEM professionals by 2022. [  1  ] To meet this need and bring welcome diversity to STEM industries, we must continue to support and encourage STEM degree completion, especially for African-Americans and others who are underrepresented in these fields yet have a long history of achievement in STEM fields.

Historically Black Colleges and Universities (HBCUs) are particularly critical to meeting the STEM challenge, as engines of economic growth and ladders of advancement for generations of African Americans. That's why the Administration has instituted policies that provide $850 million over the next decade to renew, reform, and expand programs to ensure students have the opportunity for educational and career success at HBCUs. Over the past seven years, the Obama Administration's efforts have resulted in unprecedented levels of public-private collaboration in STEM education; policies and budgets focused on maximizing Federal investments to increase student access and engagement in active, rigorous STEM-learning experiences; and meaningful efforts to inspire and recognize young inventors, discoverers, and makers.

Despite many of the STEM education programs called for by the President not being funded by Congress, the Administration has made significant strides to close the access and equity gaps in STEM education. The Department of Education, specifically, created an Office of STEM to help coordinate STEM programs throughout the Department and across our Federal partners. Also, STEM is now a funding priority in over 60 different ED programs—including the Arts—to raise awareness of the need for and interest in strengthening STEM education.

The contributions of HBCUs do not stop there: 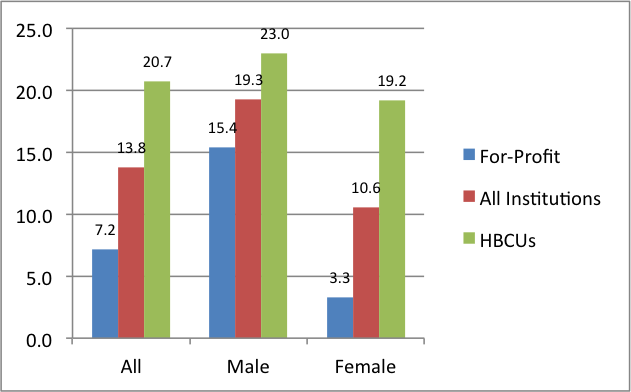 African-American and Latino college enrollment is up by more than a million students since 2008. [  4  ] While these institutions have made considerable progress, there is more to be done.  Students of color still have low degree completion rates and low representation in STEM fields, where needs for professionals and technical personnel are growing tremendously. African-American students, like their Hispanic, American Indian, and Asian counterparts, are underrepresented in STEM programs and courses of study compared to their overall college enrollment rate. African-Americans received just 7.6 percent of all STEM bachelor's degrees and 4.5 percent of doctorates in STEM. [  5  ] In 2011, 11 percent of the workforce was black, while 6 percent of STEM workers were black (up from 2 percent in 1970). [  6  ]

From early in his Administration, President Obama has made STEM education a priority. The Administration's actions to accelerate progress include:

The Department of Education, specifically, administers a number of impactful STEM programs to improve student preparedness and increase degree attainment, including: