U.S. Secretary of Education Arne Duncan today laid out his vision for America’s higher education system of the future. Duncan noted that while more students are graduating college than ever before at our nation’s world-class colleges and universities, for far too many students, the nation’s higher education system isn’t delivering what they need and deserve. America’s students and families need, and the nation’s economic strength will depend on, a higher education system that helps all students succeed. That starts with making college more affordable but goes much further – to focus on whether students are actually graduating in a timely way with a meaningful degree that sets them up for future success.

Today, nearly half of all students who begin college do not graduate within six years, and the consequences of taking on debt but never receiving a meaningful degree can be severe. Students who borrow for college but never graduate are three times more likely to default. A stronger focus on outcomes for students means change for everyone – schools, students, states, accreditors, and the federal government.

College Is More Important – but More Expensive – Than Ever Before

A postsecondary credential has never been more important

In today’s economy, higher education is no longer a luxury for the privileged few, but a necessity for individual economic opportunity and America’s competitiveness in the global economy. At a time when jobs can go anywhere in the world, skills and education will determine success, for individuals and for nations. As a result, college education remains the best investment a student can make in his or her future.

Students – including many older students juggling work and family responsibilities – recognize that higher education is a key to opportunity, and that has fueled a substantial increase in college attendance rates in recent years. Unfortunately, because of the rising cost of college and the fact that too many institutions of higher education are not delivering the quality education that students need and deserve, too many students are either not completing degrees or are completing programs that are not valued by employers.

College has never been more expensive

Even as a college degree or other postsecondary credential or certificate has never been more important, it has also never been more expensive. Colleges have not focused on keeping costs down, and tuition has spiraled out of control. Meanwhile, states have slashed their investments in higher education, and Congress has failed to protect the purchasing power of Pell Grants over the decades. Consequently, college costs for hardworking students and families have grown dramatically, with wages failing to keep up.

Too many recent college graduates feel the weight of their student loan payments holding them back from fulfilling their full potential. And far too many prospective college students feel as though they are simply priced out of the education they need to set themselves up for future success.

Today, college remains the greatest driver of socioeconomic mobility in America, but if we don’t do more to keep it within reach for middle class families and those striving to get into the middle class, it could have the opposite effect – serving as a barrier instead of a ticket to the American Dream. Every qualified student deserves access to an affordable, high-quality degree or credential that allows them to put their talent to work.

The Obama Administration has made historic investments in college affordability

Since taking office in 2009, the Obama Administration taken strong action to counteract the rising cost of higher education, expanding Pell Grants and making student debt more manageable by expanding loan repayment options that cap payments based on income. Putting in place the largest investment in higher education funding since the GI bill, the Administration has increased total annual aid to students by over $50 billion from 2008 to 2016, and selected annual tax benefits by over $12 billion, which has helped our nation ensure more students are graduating college than ever before.

The Administration has also worked to help Americans manage their student loan debt after leaving school. In addition to fighting to reduce student loan interest rates, the Administration has improved and expanded income based loan repayment options, ensuring that all Direct Loan borrowers can cap their payments at ten percent of their discretionary income and that loan payments are manageable. As late as mid-2012, fewer than a million borrowers were in income-driven repayment plans. The Administration’s expansion effort has nearly quadrupled participation, and delinquencies and defaults are down.

Doing More to Focus on Outcomes

Addressing growing college costs and debt is absolutely critical. Many more students need access to vastly more affordable and quality higher education opportunities – including tuition- and debt-free degree options. For too long, though, America’s higher education system has focused almost exclusively on inputs – money for enrolling students – and too little on outcomes – what students get out of college.  We must shift focus toward creating an accountability and incentive structure that provides educational opportunity by ensuring that students are graduating on time with an affordable, meaningful degree or credential.  Otherwise, we will merely be finding better ways of paying for an unsustainable status quo.

While graduating with high levels of debt is holding too many borrowers back from reaching their full potential, the even more damaging outcome is for students who take on debt but never complete their degree. In fact, students’ ability to repay their loans depends more strongly on whether they graduate than how much total debt they take on.[7]

The Obama Administration is shifting the conversation toward outcomes

Over the past six and a half years, the Administration has pursued executive actions and put forward policy proposals to address structural flaws in the higher education system and create incentives for all actors to focus on student outcomes.

Innovative programs are lighting the path toward the future of higher education – one that allows all types of students to pick the environment and learning style that is best for them. Not everyone’s college experience will look the same, but they must all have one thing in common: an unyielding commitment to student success and outcomes.

Much work remains for all involved

Despite the Administration’s historic actions and the leadership of innovative institutions, much work remains to meet our goal of once again having the highest proportion of college graduates in the world. The Administration will continue to act within its power to control college costs and help students graduate on time with a meaningful degree. We need Congress, states, colleges and universities, and accreditors to join in that effort.

We must encourage states to reverse a quarter-century-long trend of disinvestment in higher education, promote reforms to support student success, and embrace their role in overseeing institutions. Thirty states already fund institutions to some extent based on performance indicators and several others are transitioning to such systems.[13]  We need to build on that momentum and progress.  States must also align their secondary and postsecondary systems, reform remedial education, and ensure seamless transitions into college and among institutions by making it easy to transfer credits.  And they must take seriously their historical role in consumer protection through a robust authorization and oversight process, as well as active compliance and monitoring of institutions doing business in their state.

We must encourage accreditors to focus on student outcomes, raise the bar for quality, and promote transparency. As innovation produces a greater variety of options for students, accountability based on results becomes even more important. Accreditors must offer new levels of transparency and quality assurance based on outcomes – not just inputs.

We must encourage institutions to improve their performance by recognizing and rewarding colleges with strong student outcomes, especially with the neediest students, and incentivizing underperforming colleges to improve. All institutions and systems must do more to control costs and innovate to make degrees more affordable, and focus on their success rate with students who have traditionally been least likely to complete their programs and degrees. And for those that are ultimately more concerned about their bottom lines than about their students, we should stop the flow of taxpayer dollars.

In addition to supporting these needed changes, Congress must do more to protect students from unscrupulous career colleges that deceive students into taking on debt they will never be able to repay and stick taxpayers with the bill. We must strengthen, not weaken, accountability in higher education. For too long, Congress has sat on the sideline – or worse, actively fought – the Administration’s efforts to protect students and taxpayers from these predatory and deceptive practices. 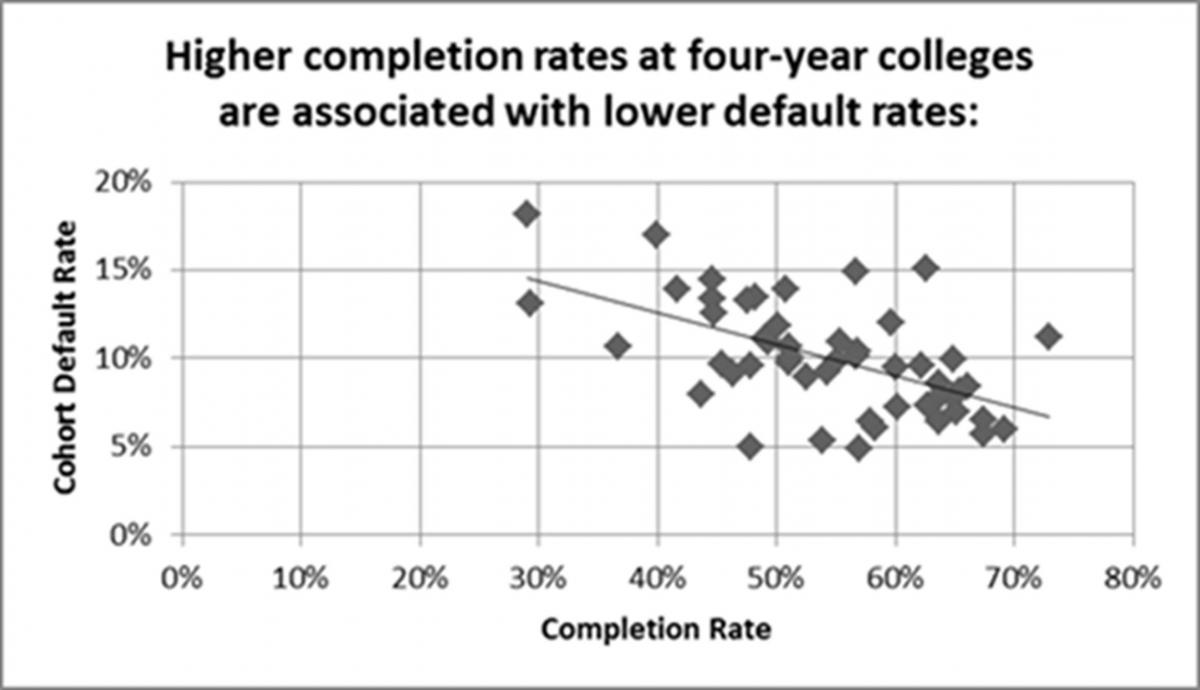 DEFINITIONS:
STATE: The state in which the institution is reported to be located, including for distance and online education schools.
COHORT DEFAULT RATE: The three-year cohort default rates (CDRs) represent a snapshot in time.  The FY 2011 rates were calculated using the cohort of borrowers who entered repayment on their federal student loans between October 1, 2010 and September 30, 2011 and who defaulted before September 30, 2013. Source: Office of Federal Student Aid
COMPLETION RATE: The 2013 graduation rate is based on the number of students who entered the institution as full-time, first-time, degree-/certificate-seeking undergraduate students in a particular year, and who graduated within 150 percent of normal time to completion (meaning within six years for a four-year degree). Source: IPEDS