Fact Sheet: 100,000 Children from Low-and Moderate-Income Families Could Lose Access to High-Quality Preschool Under the 2016 House and Senate Spending Bills

Fact Sheet: 100,000 Children from Low-and Moderate-Income Families Could Lose Access to High-Quality Preschool Under the 2016 House and Senate Spending Bills

Expanding access to high-quality preschool is critically important to ensuring that every child in America has the opportunity for lifelong success – but despite the evidence showing the importance of early learning, earlier this summer, House and Senate committees authored partisan spending bills that make significant cuts to programs that provide important services such as health care, public health and safety, job training, and education. Both bills eliminate Preschool Development Grants, a program that is in the middle of building and expanding high-quality preschool in over 200 high-need communities across 18 states that span the geographic and political spectrum.

“Congress is moving forward with a plan that would take critical early learning opportunities from the children who need it the most – delaying their learning by a year and missing an opportunity to chip away at the educational gaps that exist for children from low- and moderate income families. These children and their families cannot afford to wait for Washington to decide whether or not they get the right start for success,” Said U.S. Secretary of Education Arne Duncan.

“Experiences we offer young children in their first few years have a lasting impact on children’s development for the rest of their lives. We have to make sure those experiences foster children’s development holistically, including their cognitive, social-emotional, and physical development. We must continue to expand – not cut – access to high-quality early learning programs for our youngest children, continue enhancing the quality of our programs to keep pace with what science tells us are best practices, and keep working to ensure that all children arrive at school ready to succeed,” said Health and Human Services Secretary Sylvia M. Burwell.

In 2014, these states received grants to expand the number of children in high-quality preschool programs both by funding new preschool classrooms and improving the quality of existing preschool programs. Pulling these funds away from states and communities in the last two years of the grant would jeopardize their plans to serve nearly 60,000 additional children and would leave another 43,000 children to attend preschool in programs in need of important quality improvements.[i]

The President’s Budget offers a different path that builds on the good work underway in states and calls for expanding this program to 26-32 additional applicants, which includes states, the Bureau of Indian Education, tribal educational agencies, territories, and the Outlying Areas. This investment would allow an estimated 350,000 additional children access to high-quality preschool over the course of four years. The President has made it a priority to expand educational opportunity for our nation’s children, starting with our youngest learners, and has put forward a vision that would support the healthy development and growth of children from birth to kindergarten entry. Preschool Development Grants are a critical step toward voluntary, universal access to high-quality early learning that gives all children a strong start in school and life.

The President’s Budget invests in early education and other areas critical to the nation’s future economic growth because it reverses harmful sequestration cuts, replacing them with smart reforms in a budget that continues to cut the deficit. The Republican spending bills, by contrast, continue these harmful cuts and shortchange education and many other areas.

Why Investing in Preschool is So Important

The elimination of Preschool Development Grants is part of a larger Republican budget plan that shortchanges education for students of all ages. The Republican budget framework would lock in sequestration funding levels for FY 2016, doubling down on austerity budgeting. The Republicans' 2016 budget framework would bring base discretionary funding for both non-defense and defense to the lowest levels in a decade, adjusted for inflation. In contrast, the President's Budget would reverse sequestration and replace the savings with commonsense spending and tax reforms – all while continuing to reduce the deficit. It makes the critical investments needed to support our national security and accelerate and sustain economic growth in the long run, including research, education, training, and infrastructure.

The difference in the approach is stark. For example: 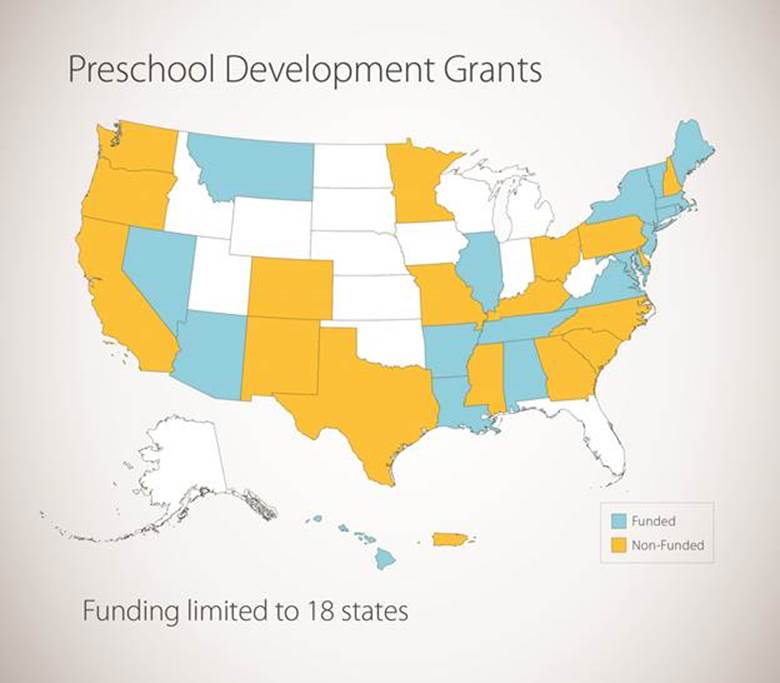 Note: This table is based on estimates from state applications. It assumes that under the Republican approach, funding would be eliminated in both 2016 and 2017

[i] This estimate assumes that the elimination of Preschool Development Grants in 2016 would prevent states from serving the additional children proposed in their applications for the final two years of the grant.