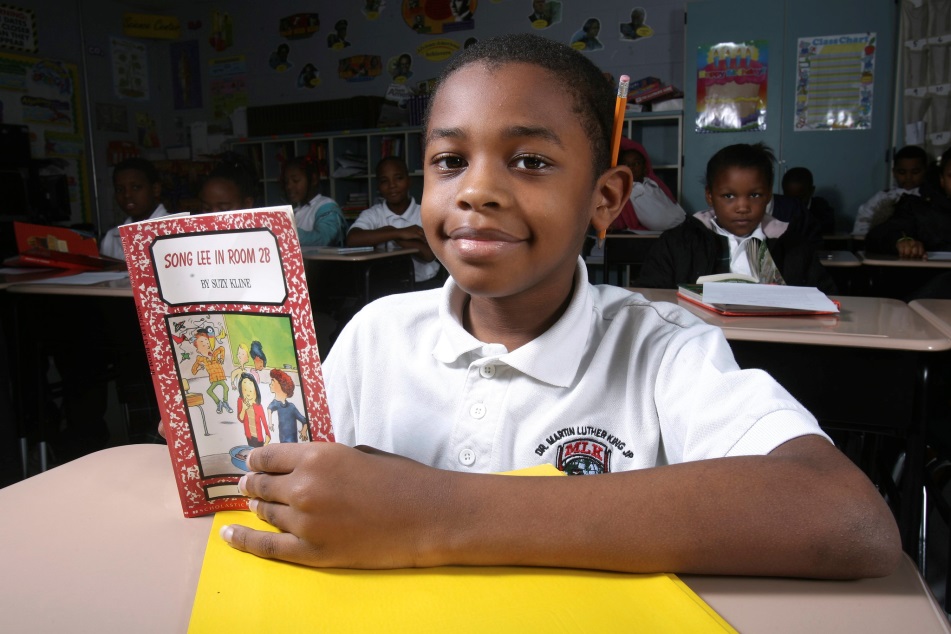 "We are true to our creed when a little girl born into the bleakest poverty knows that she has the same chance to succeed as anybody else."

America is not yet the country it strives to be—a place where all who are willing to work hard can get ahead, join a thriving middle class, and lead fulfilling lives. Our country derives much of its strength from its core value as a land of opportunity. But, today, economic mobility is actually greater in a number of other countries. Despite this challenge, we know how to work toward the solution: access to a world-class education can help to ensure that all children in this country with dreams and determination can reach their potential and succeed.

Yet, far too many students, especially in underserved groups and communities, lack robust access to the core elements of a quality education. That includes free, quality preschool; high, challenging standards and engaging teaching and leadership in a safe, supportive, and well-resourced school; and an affordable, high-quality college degree.

The challenge of ensuring educational equity is formidable. Our country's international competitors are improving faster than we are educationally, and many are having greater success in closing achievement gaps—which remain stubbornly wide in the United States. Structural barriers, including inequitable funding systems, impede our progress. While one might expect schools in low-income communities to receive extra resources, the reverse is often true; a Department of Education study found that 45 percent of high-poverty schools received less state and local funding than was typical for other schools in their district.

We also know that traditionally underserved students, including minorities and low-income students, attend and complete college at far lower rates than their peers. These students are suspended, expelled, and drop out at higher rates, and are less likely to have access to strong teachers and challenging curricula. As just one striking example, a recent study of the Advanced Placement exam in computer science found that in 11 states, no African-American students took the exam; in eight states, no Hispanic students participated.

Recognizing these disparities, the Obama Administration is committed to advancing equity in education. That commitment underlies nearly every significant activity for the U.S. Department of Education. We're motivated in this work because we recognize the power of education to transform lives.

A Focus on Educational Equity

Over the last seven years, the Obama Administration has fought to improve outcomes for underserved students through its major education initiatives by supporting states in their efforts to ensure quality teaching in every classroom; raise standards for all students; build systems to improve instruction; and significantly improve low-performing schools.

These aims also underlie foundational formula grant programs, such as those funded through Title I and the Individuals with Disabilities Education Act (IDEA), as well as competitive programs developed by this Administration, including Promise Neighborhoods, and Investing in Innovation.

The new Every Student Succeeds Act builds on many priorities of this Administration and includes provisions that will help to ensure success for students and schools. Additionally, the President's Ladders of Opportunity and Promise Zones initiatives aim to make rapid, positive change in communities of concentrated poverty. And, in 2015, the Administration provided first-time funding for Native Youth Community Projects to help Native-American and Alaska-Native communities identify and overcome key barriers to improving educational and life outcomes for Native youth.

Funds that support low-income and disabled students (including Pell Grants, which help families to afford college) make up about three-quarters of the funds that the Department distributes. Many of the Department's core activities, such as the enforcement of civil rights laws and regulations, also directly aim to improve equity. In this effort, the Administration has benefited from the guidance of the Equity and Excellence Commission, the work of the President's My Brother's Keeper initiative, which seeks to ensure better outcomes for all young people—particularly young men and boys of color—and the White House Council on Women and Girls.

In 2014, The Departments of Education and Justice, released a first-ever package of guidance and resource materials intended to ensure greater equity in schools by helping districts and educators to address the overuse of exclusionary discipline and disproportionate discipline rates for students of color and students with disabilities. In July 2015, the White House supported this effort by hosting teams of superintendents, principals, and teachers from across the country at a groundbreaking conference to advance the national conversation on positive school climates.

Thanks, in part, to these efforts, America's students are making important progress.

Support for Expanding Equity in the Fiscal Year 2017 Budget

The 2017 budget continues to support expanded educational opportunity for all students in three key areas: high-quality early learning; stronger and more diverse schools; and increased access to evidence and data to drive informed decision-making and better results for students.